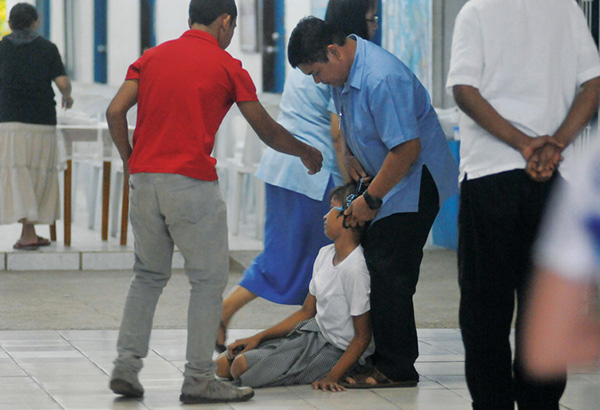 LANAO DEL NORTE – Meanwhile in Our Lady Of Perpetual Help Academy, Linamon, Lanao Del Norte, some of the students were allegedly possessed by some unexplained energy after cutting a very old Acacia tree.

According to the report of Cool Buster, a source person stated that this creepy event happened inside the Our Lady Of Perpetual Help Academy in the town of Linamon around 2:00 p.m. on Friday, August 8, 2014. The person who gave this information wants to remain anonymous.

Over 20 students were affected by these takeover of spirits. They screamed at the top of their lungs, spoke with different languages and voices varies. These students came from various sections and year levels (third and fourth year).

Aside from screaming and different voicing, they also demonstrated extraordinary strengths (that a normal human is impossible to exert) as if like they were controlled by an evil.

The cutting of the Acacia tree which was decades old was ordered by the OLPHA principal.

The provided information by the ‘source’ is supported by the several videos uploaded in social media that are showing the actual incident.

Is there any scientific explanation for this phenomenon?

This can be related on what we called collective hysteria or mass hysteria which basically means delusions that can rapidly spread through fears and rumors. The common manifestation of this will start on a group of people with the same belief that they are undergoing on a similar disease.

Upon researching if there’s a possibility that the Acacia tree is something to do with this mass hysteria, we found out that this tree contains DMT or DiMethylTryptamine which can be psychoactive additive causing hallucination.

DMT or N,N-DMT is a psychedelic compound that can override a human consciousness. It can completely detach you from the real world once inhaled or consumed. It can give you the experience of encountering the extraterrestrial beings and unknown spirits. For more detailed explanation of DMT, you can check it out in Wikipedia.

As per the tipster, the ‘possessed’ students of OLPHA were brought to a church but no latest updates regarding their condition as of yet.