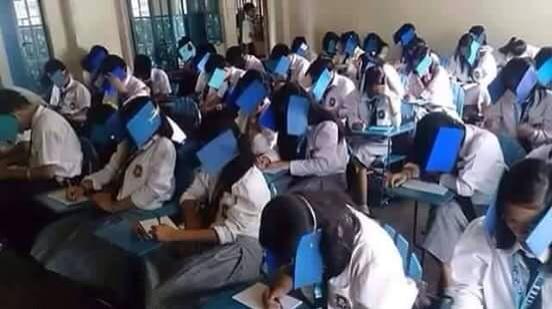 MANILA, PHILIPPINES — One of the biggest nonsectarian high schools located at the center of Pasig City in PH known requires their students to wear DIY (do-it-yourself) anti-cheating device whenever they are going to answer exercises.

La Immaculada Concepcion School is known for being a nonsectarian educational institution and for having a good location for students to study. This school in Philippines is located at the heart of Pasig City near city hall, museum, church and wet market.

Apparently, a Licsian (student studying in this school) took a photo of the class while answering some questionnaires and put it on Facebook.

This photo goes viral and spread in the Internet. In fact, 9gag re-uploaded this to their site and captioned it with: “The future is looking bright over here”.

According to our trusted sources, this “backward technique” is only being practice by a few classes or sections in LICS. Not so much info were gathered because the original post was taken down.

Some negative reactions were also poured. A former student of this school called this as “backward technique” and a form of repression.