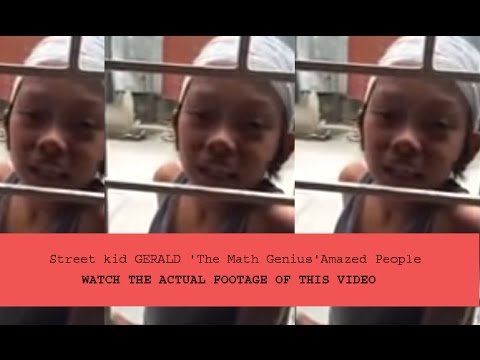 MANILA – Another amateur video published in social media network about a street kid who surprisingly turned out to be a ‘Math Genius’. He was only identified with his first name Gerald.

This video was first made its way online last July 25, 2014, and originally uploaded by a facebook user named Chelsea Mae S. Luzanta.

As of posting, this went viral and shared over 13,000 times already. Also, upon reading comments from the original posts, it seemed like the street kid can be found around Dapitan in Manila near University of Santo Thomas.

The wiz kid answered all the mathematical problems given by UST students without breaking a sweat. He’s not using any tools such as calculator to solve the problems. He even distinguished the perfect squares from not. He also knew what imaginary numbers are.

How it all started?

A group of UST students were just walking going to their classmate’s dormitory to take a rest. Meanwhile, a street kid with a plastic on his head approached the group and asking for some coins but no attention was given to him.

Gerald then claimed that they should give him some coins because he’s good in Mathematics. The students tried to asked him some basic multiplication but he declined to answer that, he wanted to solve square root problems instead.

The group was so amazed that he correctly answered all the problems that they threw at him without any computing tools, just his mind.

In the end, the group handed him some cash because he deserved it. Upon going up in the dormitory, Gerald shouted at them that he wants to solve ‘cube root’ problems at this time around.

Netizens are spreading this over and over again in the hopes that somebody or some institution could possibly see this and help Gerald to get him into a scholarship program.