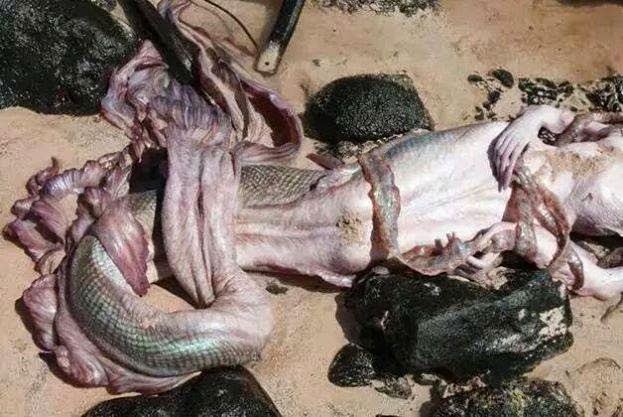 We have an update on this issue. Find it out here: Why the alleged mermaid photos are not real?

Images of an alleged “mermaid” were uploaded in Facebook few hours ago by Link Tungsen. This aquatic creature has an upper body of a female human, but its lower part is a scaly tail of a fish.

A mermaid is believed to be a folklore across the whole world especially in Asia, Europe, Near East, and Africa.

The very first mermaid story went out when a goddess felt love for a mortal (a human shepherd) but she killed him unintentionally. She was so ashamed that she jumped in a lake.

This story went down in the history of Ancient Greece was in Assyria c. 1000 BC when goddess Atargatis jumped into a lake and transformed into a fish but bodies of water cannot obscure her beauty so she took the form of a half human and half fish or also known as a mermaid.

In this last image of a mermaid that was allegedly caught, a white board (or paper) looks suspicious that can make people think that this is just another hoax photo of aquatic creature.

There was no further details on when and where these photos were taken.

According to the scientists, 95% of our ocean is still unexplored. It has not seen yet by the human eyes.

Ocean is the largest part of the Earth. It covers over 70% of our planet’s surface. it is also responsible for regulating the temperature and producing weather conditions all around the world.

This realm is supporting all the living organisms in the planet. We only have seen the 5% of it, but what’s more in there we have yet to see? There can be more than mermaids.