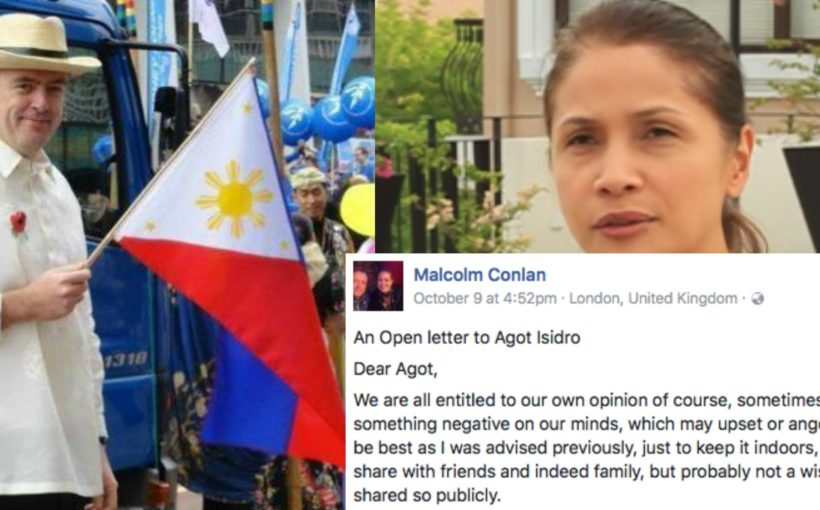 Agot Isidro’s negative statement against President Rodrigo Duterte does not cease from being viral as another personality countered her.

This time, a European national defended the president from Isidro’s remarks.

European event founder of FIL Malcolm Conlan wrote an open letter for the actress through a Facebook post.

Malcolm said that he already met Isidro personally and admitted he has high respect for her and also for her freedom of speech. However, he asserted that it was a wrong move for her to publicly denounce Duterte.

An Open letter to Agot Isidro

We are all entitled to our own opinion of course, sometimes if we have something negative on our minds, which may upset or anger others, it may be best as I was advised previously, just to keep it indoors, by all means share with friends and indeed family, but probably not a wise move to have shared so publicly.

I have met you before and you were really lovely, so I do of course respect you and your right to freedom of speech. However, to publicly label your President as a ‘psychopath’ was probably not a smart move.

President Duterte may be a touch vocal and perhaps some might argue, may not always choose the right terminology when speaking in public. However he speaks from the heart.

He has done so much good for the country in his first 100 days as President.

He has almost stamped out, or at least greatly reduced corruption in public office. A disease which has riddled the Philippines for too many years now. I am sure now, those in public office would think twice before deviating from the rule of law or not upholding the law properly.

He is proposing to increase the validity of the Philippine Passport from 5 to 10 years, he intends to make it easier for OFW’s to travel abroad in search of a better life. Even my own family have benefited from less red tape when dealing with hospitals and public services.

Then there is the drug problem, there are over 3 million Filipinos addicted to drugs, so many crimes are committed whilst under the influence of drugs. Under Duterte, look how many drug addicts have surrendered and are now improving their lives and that of their families.

I hate the term ‘third world country’ the Philippines is a developing country, which is in fact developing fast.

Look how call centres are moving from India to the Philippines. Look how much tourism to the country has increased and there are more opportunities for Filipinos worldwide. With every war, sadly there will be innocent victims sadly caught up in the crossfire, but by and large, I believe that President Duterte is doing his very best to make the Philippines a better place for us all.

Finally regarding other countries commenting and indeed criticising Philippine internal affairs, I am sure they would also be upset if we were constantly critical of their laws, policies and behaviour. Look at the amount of innocent people killed in ‘friendly fire’ in other countries, look at the amount of people losing their lives due to their race and many other examples of wrongdoing around the World.

Doesn’t President Duterte have a right to stand up for himself?